It’s July 2nd which means I’m probably deep into John Adams (HBO) and muttering to myself that the REAL Independence Day is July 2nd. I digress.

You can quote from the Declaration of Independence because, likely, your elementary school teacher made you memorize “We hold these truths to be self-evident, that all men are created equal, that they are endowed by their Creator with certain inalienable Rights, that among these are Life, Liberty, and the pursuit of Happiness. That to secure these rights, Governments are instituted among Men, deriving their just powers from the consent of the governed. That whenever any Form of Government becomes destructive of these ends, it is the Right of the People to alter or to abolish it, and to institute new Government, laying its foundation on such principles and organizing its powers in such form, as to them shall seem most likely to effect their Safety and Happiness.”

This is one of my favorite primary sources as it’s a act of treason. Or an act of bravery depending on how you look at it or which side of history you are on. Piecing apart this document and making it accessible to students can be a bit much. To them, it looks like a long, drawn out letter in a world of 140 characters or less.

So how do we, as teachers, look at this document? First and foremost, this is not a governing document. And, you need to chunk it out. (I like to play Farmer Refuted here and give the students the lyrics so we can break apart what Ham and Seabury are arguing about). Doing it WITH them is helpful because not only can you model it, but sometimes the students notice things you don’t! How cool is that?

First, HBO released a documentary called The Words That Built America. It’s free without HBO! It’s a reading of the founding documents including the Constitution and the Bill of Rights. I like this because it helps out our auditory learners. I love to listen to audiobooks and podcasts, so this is right up my learning alley. It’s roughly 11 minutes long and has a short summary at the end of the war. (Side note: The American Revolution and the Revolutionary War are TWO separate things).

Then let’s take this piece by piece. The first two paragraphs can be read aloud in class, with the teacher taking the role of breaking it apart to decipher meaning. I LOVE this lesson from the Bill of Rights Institute. Handout F has John Locke’s Second Treatise of Government which is a suggested document in the course framework from College Board. This lesson has modifications for our second language learners and can be easily adapted for 8-12. In the same token, Teaching American History has some great stuff. It is important, as educators, that we’ve already unpacked the document for ourselves (and maybe shared that with our students who struggle) so that we can effectively help them unpack it.

Well, it’s fun to bring in Hamilton because most students are familiar with it, it’s relevant, and it’s fun. And don’t you really wonder how King George took this? Because it was NOT lying down. You know homeboy was very unhappy. He addresses Parliament in October of 1775. {Perfect time to play You’ll Be Back}

As an extension, students can create a Twitter feed between King George and Thomas Jefferson using the list of grievances. Anytime I use Twitter in class, students use a class hashtag. This way, I don’t need to follow them and they don’t need to follow me. It’s been a fun way to engage outside of school. (We use #apschley{thegraduationyear} as our yearlong hashtag) For more engagement, students can create their own. This requires them to look at the sources in a different way and engage in a way that makes sense to them. They can create them on paper or in Twitter itself. 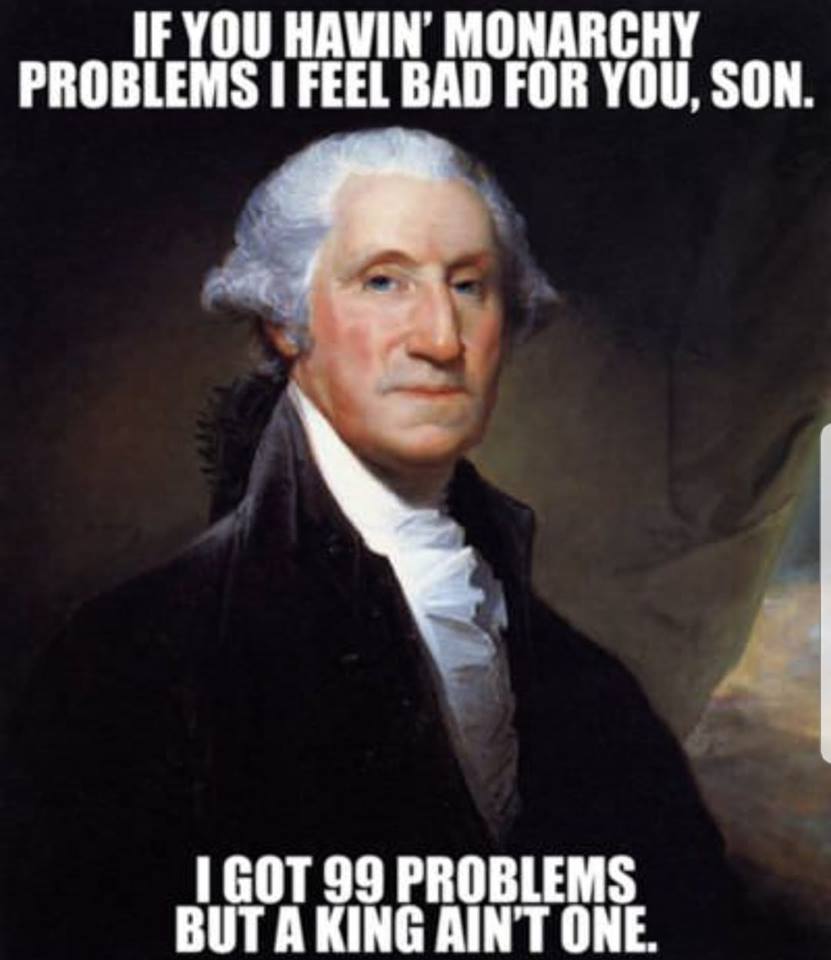 And random story about my main man, James Madison. He died on June 28th. Just shy of July 4th. Rumor has it (this is from my weekend studying at Montpelier) that the doctor asked if he wanted to be kept alive, and Madison declined. We all get it Jefferson, Adams, and Monroe. You died July 4th. Way to be super eery.

Lesson Ideas for Ideals of Democracy:

Discussion: Compare and Contrast the draft of the Declaration of Independence to the published copy. Discuss why changes were made. How have those changes shaped our government?

Writing: Explain how the Declaration of Independence has grown with the US. {Student should reference parts of history, preferably from AP US History, in their explanation}

Button! on The Late Show with Stephen Colbert

You”ll Be Back- King George Responds

Hamilton Lyrics Book (this is a lifesaver)

Why Did Jefferson Draft the Declaration?

What You Might Not Know About The Declaration of Independence